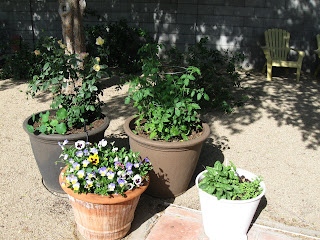 I have acquired a camera and taken a few pictures. Here's a shot of the cheerful pansies I can see out my back sliding doors.

Here is an overview of the garden layout.The Street is at the top (North) and the gate at the bottom (South) leads to the alley where shared garbage and recycling bins live. 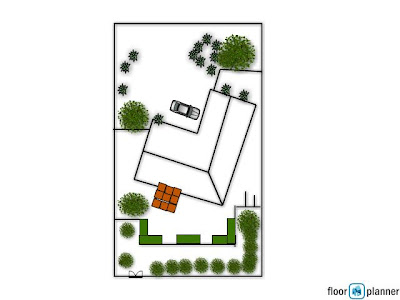 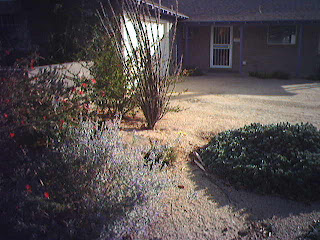 The front yard is a desert landscape, low water usage plants and trees on drip irrigation. I'll describe this with pictures in a later post. The house is a typical 1950's rancher made of concrete block - typical for Phoenix anyway.
The whole yard has decomposed granite instead of the grass that was there when we bought the
house.
We used to have a swimming pool but last spring we had it completely removed and filled in. 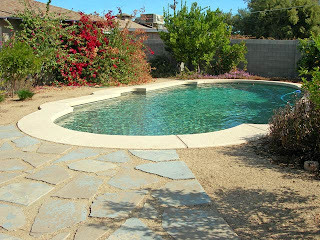 The pool did look nice. Here's a picture taken with my cell phone camera two summer's ago. Unfortunately when the pool was removed, they removed the broken concrete patio which we loved.

After removing the pool (alas, no photos of the bulldozers), we let it sit for a while to see if the dirt would settle anymore. It stayed level. In November 2007 we had all new irrigation, large raised planters and a mulched orchard area installed. A line for container pots was also installed.

The orchard area is the 12 feet from the back of the raised planters to the existing six foot high block wall that surraounds the back yard. The orchard and the big raises planters are on in-line drip irrigation, called Netafim, which was invented for argicultural use in Israel. 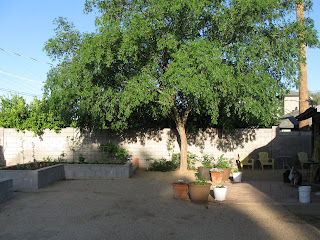 This picture was taken from the East side facing West. The tree is a Chinese Elm. It leafed out in late March. 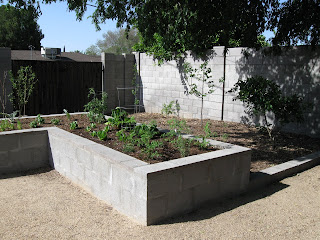 Here is a closer view of the raised planter on the East side. You can see (from left to right in the orchard area) the new peach trees, a plum, a citrus, an aprium and a Meyer lemon. The gate leads to the alley. The planter is planted with tomatoes, herbs, artichokes and lettuce. 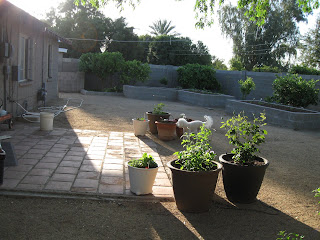 This picture looks East from the Elm tree. The swimming pool used to be in that open area and where the planters are now.
I recently pruned the citrus. My goal is to keep them under 8 feet so I don't have too much fruit from any one tree. Also I'd like to be able to prune and pick without getting on a ladder.
The citrus trees shown are a thornless Mexican lime (very vigorous!), two blood oranges, a grapefruit and orange planted closely together in the corner.
Our other Meyer lemon is to the right of several smaller citrus and some other trees that were recently planted. 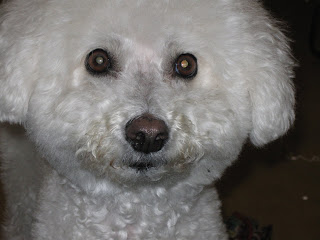 That's our dog Ralphie, investigating the containers. I can't resist adding a close-up of Ralphie.
We had various problems with the irrigation but the installers have worked with us and I think it is all working as planned now. I worked with a local company that focues on sustainable landscaping.
I have been a little unhappy with the fill for the raised planters as it is a very coarse woody material which has not worked well for seeds or transplants. The same material was used to put in about 6 inches of mulch in the orchard area and it works great there.
I planted a lot last fall/winter and nothing thrived except one rapini.
A few weeks ago, once the irrigation flooding was solved (a valve problem), we added a lot of finer organic compost to all the raised beds, plus compost tea and fish emulsion. I planted a lot of seeds in the East bed - they are are not doing well. Birds seem to be getting the few that do emerge.
I expect the soil will be better next year after the wood has broken down more. The compost tea and fish emulsion are really helping too. 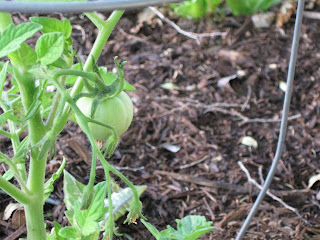 This week I was excited to get our first tomatoes. This is late, we may not get a harvest before the hot weather stops everything, but I am still excited. 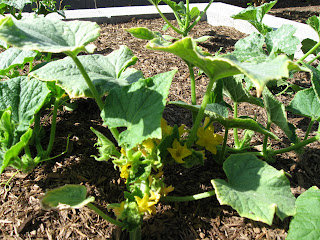 Things grow so fast - here are the first cucumber blossoms. 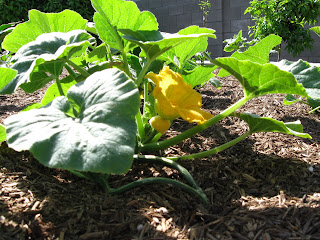 The squash plant has it's first blossom, complete with tiny pattypan squash. It is planted in the same spot that produced a great rapini plant over the winter so there is something good in the soil in that spot. I planted a yellow squash, a green squash and a yellow zuchinni. Also a 6-pack of green zuchinni in a different area. I wanted to have at least a few things that are easy to grow. 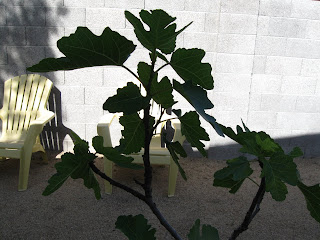