Roses on the Doorstep

Our neighbor across the street has been keeping us supplied with roses. These appeared on our doorstep wrapped in a towel and I haven't seen him since to say thank you. I love the striped or splashed roses. The bouquet has a strong rose scent. 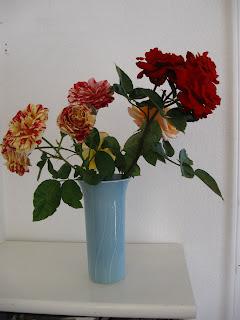 I also wanted to see if he has any oranges left on his trees. He has several mature orange trees which produce far more than one person can eat and he has always said we can pick them anytime. We've picked the one in front but I hate to go in his backyard without him realizing it.

My craving for citrus has been growing stronger ever since we finished the citrus from our trees this year. Finally I broke down and bought some yesterday. I ate one immediately when I got home and felt immensely better.

I took these pictures a couple of days ago, at the start of a heat wave. It's been in the 90's for 3 days but still cooling at night.

Here's a couple of shots of our front yard. The hummingbirds love the orange ocotillo blooms. The red flowers in front are Baja fairy duster and the yellow blooms are on a small Mexican bird of paradise which has the potential to be a small tree. I planted it a little too close to the Chitalpa tree which will be covered in pink blooms later. Actually I did not really mean to plant it there, I just put it there because there was a dripper already there and I meant to move it to a better site when I decided where it should go. That was a few year ago. 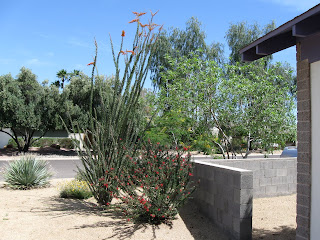 The blooming of the white Lady Banks rose is at an end for this year but it was luscious and heavenly scented while it lasted. 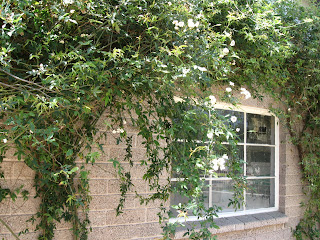 Back to the veggies. My husband asked for kohlrabi (he loves all cruciferous veggies) and it looks like we will actually have a small harvest soon. 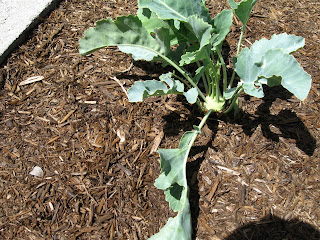 In and earlier post I was quite excited about my melon seeds growing. Since then, they have all died and most simply vanished! This was the largest and the last one. The stem is broken. It is either birds or my dog running in the orchard. The melons that I transplanted are still doing well and starting to flower but I mourn the loss of 9 melon plants. I can see that it is the fruit (including tomatoes) that gets me most excited in the garden. 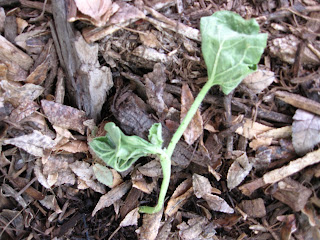 Growing plants from seed is mostly new to me and I'm not doing too well so far. I planted a 4x8 bed with radish and carrot and lettuce seeds and have really tried to keep it damp but I think all I'm going to get is a few radishes. The seeds do sprout but they do not survive. 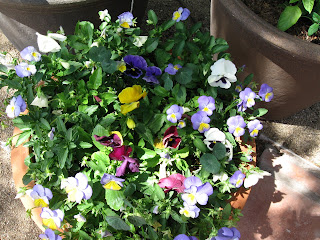 What you might try with your seeds is to place wet burlap over the seed area and keep it wet. The seed will germinate under the burlap and poke thru it. It also sounds like they might be "damping off". I can't remember what to do for that. You also could try growing them inside and then transplanting them, but you might keep your house too cold. Why don't you try radishes? They are very fast-growing.