I've joined a CSA. If you think that means we must have an awful lot of veggies - ours plus the CSA's - well, you're right. But it's fun. The CSA share includes a dozen eggs (from some very happy chickens) and a big bunch of flowers, which I seldom buy for myself. 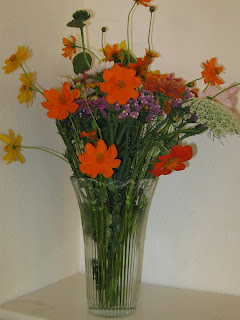 It's educational to get Maya's Farm's veggies and compare to mine. Her cucumbers look just like mine but hers are delicious and mine are bitter. In fact, I pulled out two huge cucumber plants and just left the lemon cucumber. It's great, and the skins of the cucumbers are not tough. Stella told me that the secret is to pick before they actually turn yellow.

Maya's share also includes a big bunch of Italian parsley and micro-arugula or baby lettuce. She included some really big squash and last week I made stuffed squash, filled with a Greek meat sauce (like you make for moussaka) and topped with cheese. I'd never made stuffed squash before.

I haven't written much because I've been sick and not had much energy. Also I've had to put in extra hours at work so that I can get really for a longish leave of absence starting mid July.

But the garden is doing great. It's hot now but still cool in the mornings. The plants in pots in the shade are doing especially well. The melons are amazing. I'm going to have to read up on how to know when they are ripe. I think I remember that the undertone turns yellow/gold and the fruit separates easily from the vine. I can now see which ones are watermelon and which are cantaloupe. The watermelon plants have deeply divided leaves. I have several varieties each of cantaloupe and watermelon. I think that the honeydew have not fruited yet, but I planted them later. Next year I'll have to start melons from seed to get more varieties. I did start some this year but I started them in the ground and they grew well, then wilted. I could start them in pots and let them get bigger before transplanting.

I have pictures and plan to come back and update these recent posts soon. It takes a while to upload the pics.
Posted by Kathryn at 4:47 PM

Sounds great. I want some melons! We usually only get one or two a year because they are rather expensive at the Farmers' Market. They just won't grow here. Sometimes if you leave melons on the vine too long, waiting until they separate from the vine naturally, they will get overripe, so be careful. Growing from seed would definitely be worth it to get good varieties.