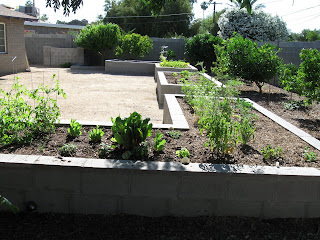 One goal of building the new garden was to get outdoors more. When it's so hot in the middle of the day, I have a tendency to forget to go out early mornings and in the evenings, when it's often cool or pleasantly balmy. And then I sometimes am just in the habit of staying in, and forget to go out, even when it is lovely outdoors. But now I go out and inspect the garden twice a day and often go out to add to the compost heap. I'm loving it! I even stopped going to the gym in favor of longer dog walks. It's getting hot though, and I'll resume the gym visits next week. 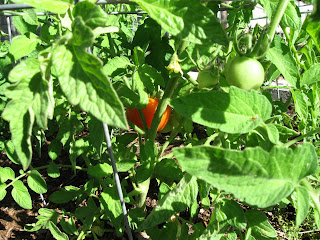 The tomatoes are starting to ripen. Yesterday I noticed the first reddish tomato (above) and today it is redder and some of the cherry tomatoes are also turning reddish.

Eggplants - the first eggplants are now a few inches long and there are lots of flowers. 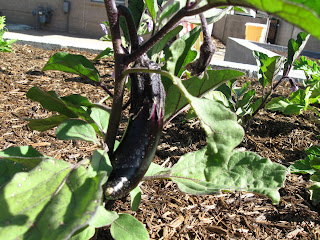 Pattypan squash - although these were the first summer veggies to appear, they are not doing well. The veggies wither and the new flowers are covered in aphids. I think that whole bed has suffered from water stress.

Zucchini - the first zucchini are ready to harvest, at about 3-4 inches. We lost about half the first crop - they turned yellow and withered. Water stress I think. 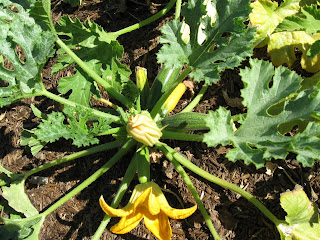 Beans - the bean plants have climbed to the tops of their cages but we only have a few bean pods formed so far.

Aprium - the fruit is turning yellow but still unripe. I noticed the first local peaches at the farmer's market on Saturday - they but a big sign up so we saw it as we drove by. Unfortunately we could not stop. Next week.

Berries - One ollallieberry, which has turned red. But they are almost black when ripe. I expect a bird will get it so I am watching it closely. The brazos blackberry has not grown much, it's still a few inches high. The olallieberry is at yeast a yard wide now. 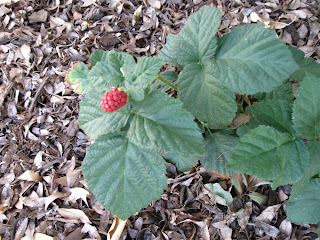 Melons - all the remaining melon plants are very healthy. Except for the ones I put in last week, they are all huge and flowering, but no actual melons.

The cucumbers are extremely vigorous and prickly. They have lots of flowers and little cucumbers. I planted 3 different varieties but I don't know which is which and they are all tangled together. One is for cornichons, so they are to be picked small.

The coriander never thrived but it has shot up and flowered and I'm leaving it in place in hopes that it self-sows.

Peppers - small peppers are forming and lots of flowers promising more even though most of the pepper plants are quite stunted looking. One plant is large an healthy looking.

The artichokes wilt alarmingly in the afternoons but so far they recover. No chokes. The outer leaves get crispy and new one form.

Flowers - the pot of winter flowers is very healthy still. Some of the nasturtiums have flowered and others succumbed to overwatering in a pot that does not drain. 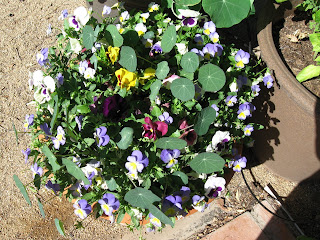 Fig - the fig tree is putting out tiny figs. This seems late. Others in the neighborhood are very large. I have a picture of a huge fig tree nearby, I stood under the tree and took the photo pointing straight up. It's a yellow fig and the owners say it ripens in June and we are welcome to pick as many as we want! 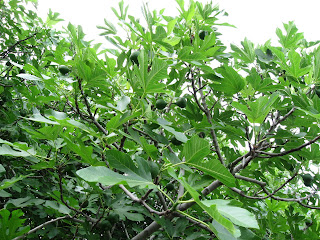 I will be there in June to pick the figs.

Sadly, I don't think your artichokes will ever thrive in Arizona. That's why there are so many here on the Central Coast. They need fog.

Your garden is amazing. I really can't wait to see it. I bought three tomato plants last weekend. Ron dug the holes and put in the chicken wire. They're by the kitchen sink so I'll plant them this weekend. I also have beans to plant and some old flower seeds that I may just toss into the garden and see how they grow.

Congrats on the garden! (We have a reddish strawberry!)

Some people do have productive artichokes here, amazingly enough. I think I will need to plant them in the shade to be successful. I wonder if artichokes are annuals here, dying in the summer? I'll have to ask my gardener since he grows them in his garden.

Also I have adjusted the watering in all the beds. It's the same amount of water per week but now I am watering everyday, three times a day for 2 minutes each instead of every three days. We'll see.

I bought organic strawberries today at the Farmer's Market that were picked yesterday in San Diego - yum.

I don't think my beans are going to make it, too crispy.