Rain, Weeds and the Neighbors Lose a Fig

We've had a lot of rain. Locally it's known as the monsoon season, but having lived in Thailand and India, I can say that it's nothing like a real monsoon.

It's enough rain for weeds to thrive and attempt to take over my yard. Fortunately the weeds are not in the orchard or the raised beds, not yet anyway. My husband and I have been risking heat prostration to get the weeds under control. Luckily the ground is soft from all the rain.

Earlier in my battle against the weeds, I had purchased a tool known as "Grampa's Weeder" which had proved useless in our rock hard soil. But it works perfectly with the ground damp from the rain. You center it over a weed that has a carrot-like root, press down, then lever out the root - all from a standing position.

On a foray out, I discovered that a neighbor's fig tree has fallen over. This is not the fig tree that we have been raiding - that one is MUCH larger - but it is the same variety. I had noticed previously that it had poles seeming to help prop it up and I guess the storm did it in. We have had lots of wind and limbs and even whole trees fell down all over town. It looks like the fig tree may have have circling roots. 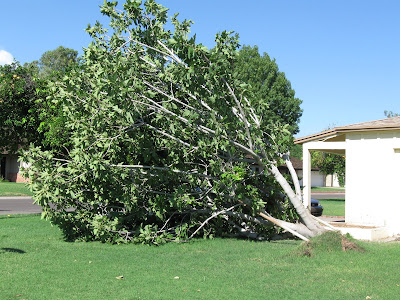 The yellow figs were not quite ripe. 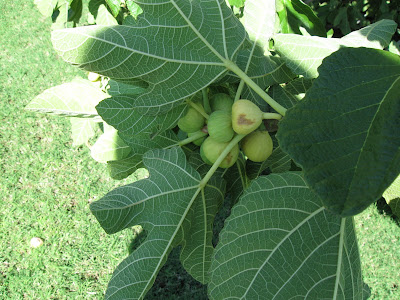