Born on the 4th of July

Dad was born on the 4th of July and we went over yesterday with cupcakes and ice cream - and another large cantaloupe from the garden. When we were little, I remember eating cantaloupe halves filled with vanilla ice cream. That still sounds good, I'll have to get a little vanilla ice cream. 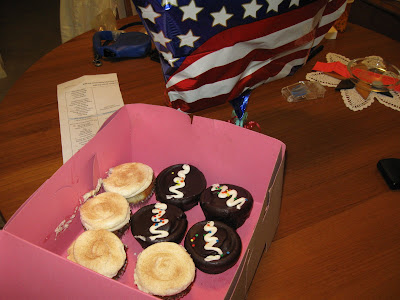 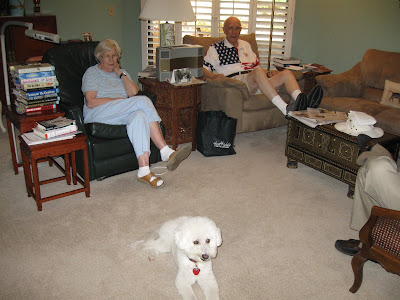 The cantaloupe that we brought over was one of 16 (16!) that I picked on Friday morning, along with a honeydew and a watermelon. I took a bunch in to work and we still have several in our frig. All have been good so far except for one that was overripe and starting to ferment inside. There are only a few melons left on the vines and I'm not sure we will have more this year. Maybe it's just too hot. Some of the vines do have flowers but some the little melons are not developing but are turning yellow and falling off.

Friday night we had a big storm and lots of rain, the yard was flooded. So now it's hot and muggy. Weeds are thriving. I'm afraid that the berry vine is not going to make it. Most of the remaining veggie plants had already died, leaving only six Japanese eggplants mini-bushes and a small okra. I'm sure the fruit trees appreciate the rain.

But it's just so hot right now. Last year we also started with a hot spell. I remember taking off for the coast over the fourth of July and the rest of the summer was not so bad. So we have hopes.

Next summer I have to be more prepared to add shade, or maybe I'll plant more in big pots that I can move under the elm tree when it gets too intense. The parts of the garden in afternoon shade from the elm have done best. Maybe I'll plant another elm tree - I can see just where to plant one for optimum shade but unfortunately it will be ten years before we'd have significant shade!

I'm planning to work on growing a few things from seed, starting them indoors in mid-August to be ready for fall planting, and otherwise staying inside a lot until it's cooler.
Posted by Kathryn at 1:42 PM

So it WAS last year that you were here. Those melons sound so good. Any chance of making watermelon rind pickle? Things are finally starting to take off in my garden, but not a long enough growing season for melons!